St. Louis Salt Room - DEVELOPED BY MEDICAL DOCTORS HOLISTIC RESPIRATORY AND SINUS WELLNESS﻿ Call 314-647-2410 for an appointment  PLEASE DO NOT REQUEST A PUBLIC SESSION WHEN A FEVER IS PRESENT OR DURING THE FIRST THREE DAYS OF A COLD 2739 Sutton Blvd. Maplewood, MO 63143 [email protected]  Individual 45-minute sessions are $35 but can be as little as $12.50 when multiple sessions are purchased.  See more details about pricing and hours in the 'About Us' section. Take Note - Shorten recovery times and prevent secondary respiratory infections with consecutive sessions.  Buy 3 adult sessions for only $60 (should be used within about 7 days) or $75 for children 12 and under (with one non-paying adult).   NEW - Private Room rates - See 'About Us' section.     -  NEW:  Our 2nd Salt Therapy room, the smaller Salt Cabin, is now available and offers more affordable private sessions for one or two individuals, or for families with a baby or toddler.  Private sessions in this room are $7.50 / $10 over the public room r 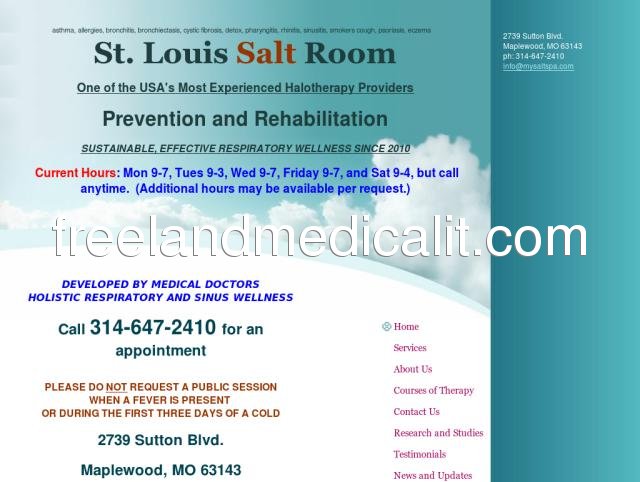